I'm explaining how to configured Jekyll-based blog to be hosted on Netlify.

As I'm not (yet) very experienced with web developing this guide can be obvious. However, it's worth noted (at least for me) so I can check it if I have to go through the setup process again.

How to setup Jekyll blog

I decided to try setting up blog using Jekyll. As a base of it I used jekyll-now repo.

For running it on GitHub Pages it was pretty easy, as written in the documentation. Just fork, rename repo to yourusername.github.io, wait up to 10 mins and you're all set. I tried to use Netlify as another platform to host it.

Update 2018-05-01: the above statement about GH Pages not supporting custom domains SSL is no longer valid as per that announcement.

One of the services that supports HTTPS for custom domains is Netlify. I quickly found this instruction.

However, it turned out it's not so easy as described in the article.

First error I received was

What I had to do was to create a Gemfile with the following:

After creating Gemfile next error was:

Luckily the description here is self-explanatory. Next one was:

I received this because I chose the theme while setting up page on GitHub. I had to remove the line theme: jekyll-theme-minimal from _config.yml file.

Next one was not so easy:

Fortunately, the line containing the error was pointed out. It contained name: Rob Dy what, for some reason, doesn't work on Netlify but works on GitHub. I tried to change it to name: "Rob Dy" and that helped.

Another error I got was:

I had no idea how this can be resolved but found somewhere that Gemfile is the one to be changed in such cases. I added the lines to add all the gems/plugins I had in _config.yml:

That's it! After that I received Site is live and I was able to see the welcome page

Just one more thing - to also see drafts on the webpage I had to adjust the settings a bit: 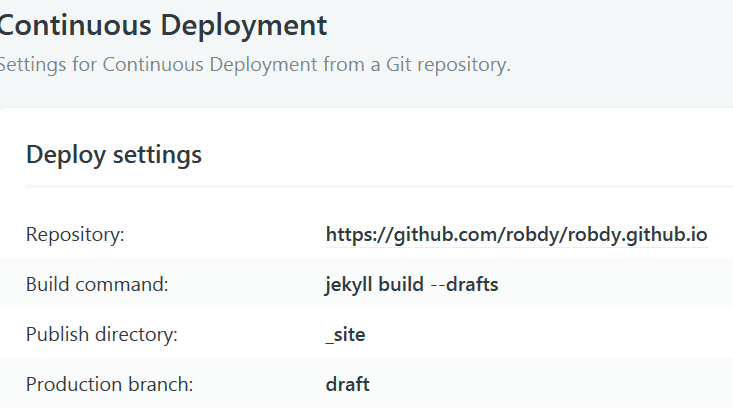